SGS College | Be Outstanding
Explore this area
Published 3 months ago

STAG was born out of the passion of one young man to make a feature film in his home town of Stroud.

In 2017, Guy Davies, brought his dream to life in partnership with Fablemaze Productions. The film they made together is a coming-of-age drama and originally entitled 'Philophobia'. Following its cinema release nationally in 2020, it is now streaming online under its new title ‘As I Am’. Shot during the summer of 2017, it engaged the local community in a myriad of ways: family homes and businesses were used for sets, local rentals and hotels for accommodation, students joined as assistants and all manner of local people filled cast and crew roles for the first time.

With shooting complete and production HQ closed down, the production team found itself with 7000 pieces of prop cutlery to dispose of. Assistant Producer, Annabel Richmond attempted to recycle the metal through a scrap dealer – but with the steel being low-grade, was refused.

‘It felt like such a waste to discard the metal, so I had an idea to connect with the art team at South Gloucestershire and Stroud College and see if we could create a sculpture that could involve local students’

The College liked the project and STAG was born. For the past four years, Art tutor, Shareena Hill and College Technician, Jake Pond, have worked with a number of students within the work experience programme to create this stunning piece of sculpture. Annabel’s brief was to construct a stag: a highly symbolic creature, the stag appears at a number of turning points in Davies’ film. 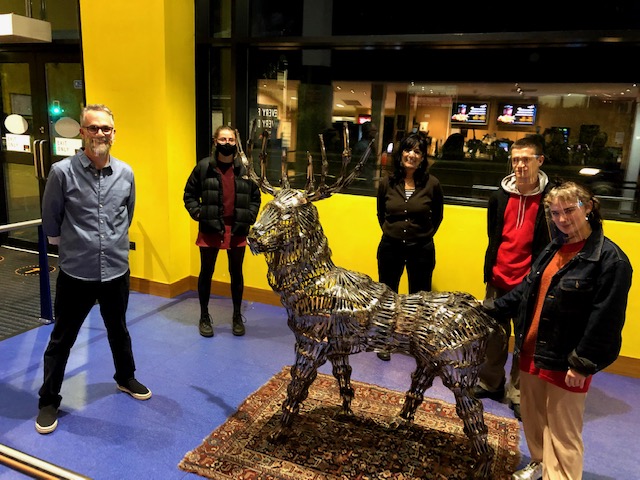 ‘This stag project has been a metaphor for growth and development through creativity. And now serves as a three-dimensional legacy to the power of storytelling through art and film. It has been a privilege to see this creative collaboration flourish during such trying times. STAG holds its head high, as if observing the outside world, and stands as a reminder of artistic resilience in the face of the plethora of challenges faced by all of us during the past two years. It is also symbolic of hope, regeneration and sustainability.’

In 2020 the sculpture was complete and exhibited at the film's premiere at VUE cinema in Stroud. The sculpture has recently been mounted on a plinth outside SGS College by their construction team. STAG will be officially unveiled on Saturday 9 October by SGS College Principal, Sara-Jane Watkins, it’s team of makers and designers and special guest appearances from acting duo Tamzin Malleson and Keith Allen, fresh from premiering his new film ‘La Cha Cha’. At this point, the sculpture will also become the focal point for an online fundraiser to support mental health.

The SGS student community has tragically been affected by suicide and the hope is to ensure that mentor training is available for all staff and that support is always available to any student or person in need. Therefore, the College has selected local charity, Sunflowers Suicide Support and the national charity MIND as the funding beneficiaries. Link to Go Fund Me page: Fundraiser by Annabel Richmond : Stand with us for Better Mental Health (gofundme.com)

South Gloucestershire and Stroud College (SGS College) is committed to delivering a huge variety of creative courses beneficial to mental health and well-being. The College offers Art on Prescription (AoP) courses aimed at a wide range of people, including those with long-term health conditions, those who need support with their mental health, those who feel lonely and isolated or those suffering with bereavement. For further information please email [email protected]

For further information about the project and launch, please contact: [email protected], 07960616226

Back to latest news

The Health Benefits Of Artistic Creation

Esports Tutor Becomes an Ambassador for Women in Games Programme

A Record Year of Success for SGS A Level Students